After a week off, Young Justice returned to the air with a new episode.  Last night's episode, "Downtime," focused mainly on Aqualad while he spent some time in...am I getting this right: Poseidinus?  I guess that's the Atlantean capital city, from the looks of it.

While I'm not much of an Aqua-fan, I have to say that first off I was pretty disappointed by Mera's character design. 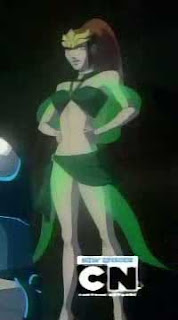 The cool thing about Mera is her scaled bodysuit, no?  The halter bikini top/pareo and random bits of chiffonn thingy just isn't regal enough for me.  Besides, she has such pretty hair!  Why pull that back into a ponytail?  Oh, and her crown was ugly, too.  Sorry, Mera, don't take it personally. 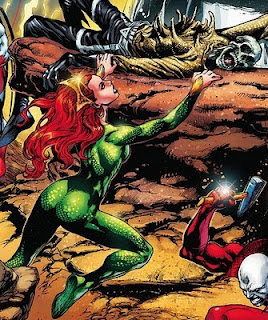 If it ain't broke, don't fix it, I says.
Aqualad noodles around with Tula, Garth (the original Aqualad, I think), and some Atlantean sorcery.  Retcons abound, but I'm getting so immune to retcons I barely notice them anymore.  The retconning bothered me a lot less than the animator's choice of underwater mechanics: when Aquaman looks awkward swimming, you know you've got a problem.
Highlight of the episode: Superboy can't figure out how to use a satellite TV.  Even someone with superpowers has trouble with that.  Now I don't feel so bad.
Oh, and Miss Martian is quite the cook.  An awkward, ditzy cook, but cute nonetheless.
Posted by LissBirds at 9:27 PM

I've never been a big fan of the Aqua-characters... :/
(even at Marvel with Namor)

Though the episode was still sort of okay~
Black Manta was badass!

Aren't there more Aqualads/boys/girls than there's been of Robins?
Hard to keep up with 'em...

People at scans-daily seem to have liked this Mera, but I found her a bit off compared to the comic book one.
Well, it is a "Ultimate" take on the DC Universe, so...

Did you catch that brief moment of a TV sitcom on Artemis's side?
"Hello Meg..." and it was cut down at this moment. Did M'gann take her name and catchphrase from an old 50s sitcom?

I never saw the show and have no desire to see it at present. I would never have guessed that was Mera. I was wondering who this random character was, lol.

Went to Wikipedia to check out the aqua family. There are two offical Aquagirls and two that are kinda considered Aquagirl for their first and only appearances.

There's only two Aqualads and the Aquababy that didn't last long. Five actually family members although Aquababy was never a sidekick.

The Robins have Dick, Jason, Tim, Steph and Damian.

The Aquababy!!!
Needs. To be. Brought BACK!! XD

Maybe but I wasn't sure myself about Aquagirl. Gave me an excuse to look it up. ;)

Their brutal with the babies in this family, Garth lost his son too. :(

Wasn't Tula known as "Dolphin" at one point, or did I just imagine that?

I can't keep up with sidekicks. I can barely keep the Robins straight. I like my heroes to fly solo!

Hey, even J'onn starting to hang out with M'gann now!

Nope, Tula died in the first Crisis (she had dark hair) Dolphin (white hair) married Garth and had his son. Pre-Crisis she was part of the Forgotten Heroes with Rip.

Well Jurgens said that he likes Booster mentoriing Jaime. I'd be fine with that.

Ahh, okay. Thanks for straightening that out, Erin!

Mehhhh....I'm not the biggest Jaime fan. I'm still sore about DC killing off Ted. I took that pretty hard. If Jaime had a peripheral role, okay, but I don't think he should be part of Blue and Gold. I think the upcoming season of Brave and the Bold has him in that capacity.

I like buddy heroes or solo acts. I've never been one for sidekicks for some reason. Though Miss Martian is growing on me lately. She's awfully cute.