I'm on a John Jones kick again.  So I figured, why don't I make an event out of it?  Hopefully the week will culminate with something special, when it arrives in the mail.  (Squee!)

So, what do most of us know about Silver Age Martian Manhunter?  Well, it's not all ocean gold-mining and ice cream conjuring.  Yes, there definitely is a hefty dose of goofiness, but like to think of J'onn's original source material in the same way as I think of Richard Donner's original cut of Superman II before Richard Lester came along and added in the cheese: somewhere in there is a serious story waiting to come out.

I think it's only fair to take things at face value (with maybe a few side trips into out-of-context jokes), and I feel that J'onn's early days haven't seen their serious side represented enough on the internet.  (I'm guessing this is probably the case for most Silver Age characters.)  Hopefully I can straighten out some misconceptions, find a clearer focus of who the Silver Age J'onn J'onzz was and why he was created, and dig out some stories that a "modern" audience might appreciate.  If taken seriously, Silver Age John Jones has the potential to be a rich and meaningful character.  It's just that very few writers see him this way.

Maybe I'll need to expand this to two weeks.

For the sake of brevity, here's one panel to get things started.  If you thought my post from the other day about John Jones being a jerk was an anomaly, it's not.  Silver Age J'onn really liked to scare the crap out of people: 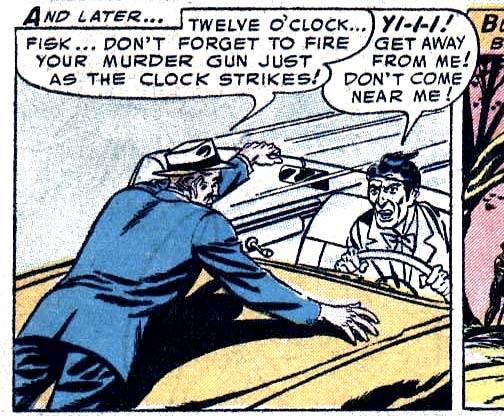 Tough love for criminals or just getting his kicks scaring the living daylights out of people?  You be the judge.
Posted by LissBirds at 11:07 PM

J'onn kickin' ass in the silver age?
Awesome, I'm all for it! XD

Incidentally, I've just arted drawing again my little Superbuddies! comic strips :P
J'onn will appear much later in the 4th one of the new batch!

A...a MURDER GUN? That sounds so much...badder than a regular gun.

I haven't posted the new ones yet :P
I have been reuploading the old parodies at http://www.coolape.org/comichosts-eyz-heroes.html
And when I'll hit the last one I've uploaded on my blog, I'll start putting up the new comics.
(a deal with fellow parody cartoonists at "CoolApe")