Ted Kord, Not Only Merely Dead, But Really Most Sincerely Dead, or Why I Don't Like You, Jaime Reyes

I was reading the lastest issue of Booster Gold last night, which took us on another nostalgia trip back to the Blue & Gold years: 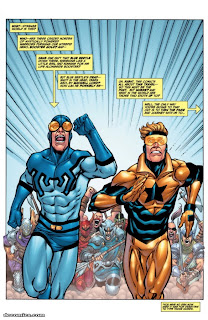 "I can't figure out why DC decided to kill off Ted Kord and replace him with Jaime Reyes."

Probably because the Blue Beetle mantle had already been established as a legacy that allowed for radical revision. The Ditko Beetle had never sold, and a humorous Blue & Gold series was never going to be given a chance by Dan Didio. The jerk wanted new brandings to spin out of One Year Later..., more minority heroes, and mileage out of killing Ted Kord.

As I said at DC Bloodlines, Ronnie Raymond wasn't the most sympathetic character and Firestorm's wasn't an uncomplicated continuity. Basically, see motivations above. I prefer Jason, myself.

"why the Dibneys were killed off"

This actually came off a list. Elongated Man was only created because Julie Schwartz didn't know DC had the rights to Plastic Man. Ralph had never operated solo with much success, and was at best the Tim Meadows of the various Justice League teams. Ralph's lackluster career put him in a dead pool that was given to Brad Meltzer for his murder mystery, and I can't think of a better choice within the perimeters of Identity Crisis.

My problem with Jaime Reyes is that he looks like Ben 10, and I didn't find him interesting after trying various issues and a trade. I have no ill will toward him, but I don't care about him either.

"My problem with Jaime Reyes is that he looks like Ben 10" I guess we're just not the right demographic to like Jaime Reyes. Maybe if I was under twelve I'd "get" him more?

The only reason I dislike Jaime Reyes is because as long as he's around there's no chance for Ted Kord coming back. If Ted Kord never existed or Jaime Reyes was his own hero, I probably wouldn't care either way. DC really needs to stop this "passing the mantle" thing, becuase it just polarizes the fanbase into those who like so-and-so and those who don't. (E.g. Ryan Choi, Dick Grayson, and the Firestorm thing.) Let minority, female, young, whatever heroes make it on their own steam and be their own heroes in their own right instead of copies of previous heroes.

Then again, Ted Kord took the mantle from Dan Garrett...but that was more like honoring an idol, and I think he made the role fully his own. Or I could just be full of crap.

And if you're going to pass the mantle, don't make it so obvious that it was based solely on personal editorial bias about a "new direction" or some such. Make it intrinsic to the story. Or am I asking too much?

And now Ted Kord never even existed at all...