Well, it was a very long, tiring, interesting day for me.  I spent most of it applying makeup that would put RuPaul to shame and twirling around on stage at the local performing arts venue.  It was our studio's end of the year recital, and even though our dance was barely over two minutes, it was a pretty tiring two minutes.  So after a lot of a day of pirouettes and looking all ballet-ish, and no comics in the mail, I don't have much to say.

Well, except this: which DC superhero do you think has some ballet experience? 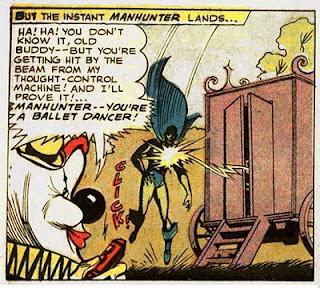 Cue the spin-off series: Justice League Bolshoi!
And who would stricken our hero with such a rigourous trial as an exhibition of ballet prowess?  Why, our old friend Professor Hugo, of course.  (I'm sure he's quite the balletomane.  You might have to look that word up, guys.) 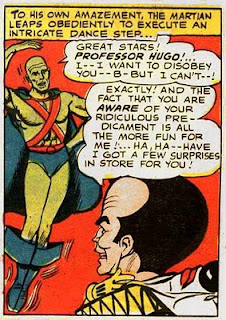 I don't think there's a name for this particular "intricate dance step" in any ballet syllabus that I'm aware of...
Let me tell you, J'onn.  Ballet is hard and a perfectly acceptable form of torture for any unsuspecting superhero, but it certainly pays off in pretty costumes and great core strength.

Hopefully tomorrow I'll find something more serious to blog about!
Posted by LissBirds at 1:11 AM

This isn't going to help JJ's popularity...Verification word is chippe...

Martian Manhunter is truly a man of many powers. :-)

With that vast powerset of J'onn's, you'd think Super Ballet Powers would be in there somewhere...! :D